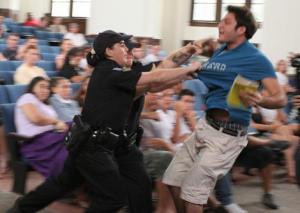 Non-academics tend to be surprised when they hear university teachers complaining about a growing number of ‘disruptive’ students. “Surely not”, they exclaim, “these are people who choose to be there, and are paying for the privilege, why would they want to disrupt classes?” A good question. I’m not sure just how new or widespread a phenomenon it is, but it is one that seems to have generated, in recent years, a growing number of comments in the academic trade press, and teaching guides. Certainly many US universities seem to have developed formal policies on dealing with disruptive students – though (outside of library policies specifically) that still seems much less common in the UK. At UKCLE we have received a few questions about how law schools should deal with the problem. It was one of these that prompted me to put some thoughts together, first as a response to the specific enquiry, and now for hEaD space.

The first step is to think about what actually constitutes disruption, and what is causing the behaviour. Studies on disruptive behaviour in schools indicate, not surprisingly, that it can be both student and teacher-induced. I suspect, in HE, quite a lot may also be influenced by the fact that students are exposed, often quite abruptly and with limited support, to what is, for some, an alien learning environment. A lot of low-level disruption is likely to reflect either a genuine lack of awareness of expected behavioural norms, or sometimes an expression of frustration at, or sometimes a feeling of alienation or inadequacy in that environment. Viewed in this way, quite a lot of ‘disruptive’ behaviour probably shouldn’t be labelled as such. In my view real disruption involves intentional behaviour that significantly and ongoingly interferes with the learning experience of other students. Defined in that way, I suggest, it focuses our attention on practices involving active non-engagement in or interference with learning activities, such as routinely and deliberately talking over the tutor or other students, repeated mobile phone use, hectoring or bullying of other students, and/or the teacher. The more extreme forms of such behaviour, rightly, become a disciplinary issue, but the lesser forms, and even unintentional ‘disruption’ can also have a serious impact on the learning environment and need to be addressed appropriately.

Arthur Levine and Jeanette Cureton in their book When Hope and Fear Collide (1998) looked at US college students’ attitudes and behaviours in the 1990’s. They interviewed 9200 students, 270 Student Affairs Officer and did focus group interviews at 28 campuses across the US. Despite its US provenance, I think it has resonances for the UK. One of their key points is that there is a significant mismatch between teachers’ teaching style and students’ learning style. While students tend to like learning that has structure and direction, involving concrete, practical, experiences and exemplars, faculty often prefer learning that moves from the global (‘general principles’, or the ‘big picture’) to the particular, involves a relatively high level of abstraction and theory, and, often the deployment of only lightly directed, or ‘discovery’ forms of learning.

My point here is not that either approach is right or wrong, rather, it is that the mismatch itself can generate a loss of respect and frustration for both sides in the relationship, and trigger patterns of ‘disruptive’ behaviour. This suggests that at least part of the solution may lie in properly addressing the difference in expectations. In the next post I’ll explore some tried and tested strategies that can help deal with the problem.

This site uses Akismet to reduce spam. Learn how your comment data is processed.